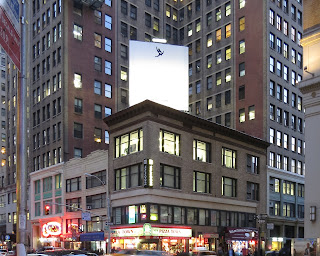 To David Dunlap- New York Times:
Dear Mr. Dunlap,
As the founder of one of the longest running and farthest reaching 9/11 Projects, called the 9/11 Patch Project, I couldn't help but respond to your request for comments on the recent Mad Men billboard.

Let me preface my response by saying that I have been a fan of the show Mad Men, but have always wondered about the opening of each show, where there are business men falling from the sky. I am sure there is some significance in this opening to the content of the show in terms of a metaphor that relates to the high stress and competitiveness of the ad business in the early sixties. As for the campaign and the billboard placement, the man falling literally hits too close to home.

It is understood that campaigns for such shows are designed to catch the eye and provide a subtle yet powerful influence on fans of the show, those that may be curious about the show and those that have been sitting on the fence, deciding whether or not they are fans. In this particular case, there appears to have been no thought in this campaign towards the sensitivity of New Yorkers and others, that a man falling from the sky can bring back the horrible images on 9/11 when multiple people jumped from the WTC towers that were raging with fire.

In my opinion, there is a profound responsibility of advertisers and promoters to continuously be sensitive to how they create their campaigns--especially when displaying their billboards in front of folks who were witness to or victims of such a horrible crime. 9/11 is engrained in the minds of American's and people around the world. Even placing such a billboard in the Los Angeles area would probably be insensitive and distasteful.

Does this change my interest in the show? No it doesn't but I am sure they will not gain respect and admiration by any who are on the sidelines. The show is one thing and the campaign to promote it is another. Just as there are consequences on the show for the characters to create tasteful campaigns, they should hold their own advertisers to the same standards and be prepared to deal with the "fall out," should they miss their mark so dramatically.
Posted by 9/11 Patch Project at 10:00 AM