A Navy SEAL Honoring the Lost Heroes of 9/11 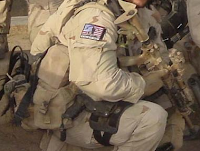 This photo is of a Navy SEAL from Team-1, taken somewhere in Afghanistan, in early 2002. Even though it was nearly 10 years ago, his face is not being shown for safety and security reasons. Those in the military will know it is authentic by the weaponry and how he is suited up. You'll notice on his right sleeve, he is wearing the Original 9/11 Patch. He made the decision to wear this patch in honor of the 1st Responders lost on 9/11.

This SEAL's actions contributed to thousands of other deployed soldiers in both Iraq & Afghanistan to wear the patch in unity with their Fire, Police & EMS brothers back home. There are some great Photo's on the website that show other U.S. Military personnel wearing the patches.

I met this SEAL about 4 years later when another Southern California Firefighter surprised me by showing up at my house with him one day.

In my 10 year history of running the 9/11 Patch Project, it is the other moment in time that rises above all. I was even more surprised when he handed me a special jacket that he had made for me while deployed in Afghanistan. On the right sleeve, was the insignia of the Team (Hotel Company) just below the 9/11 Patch, that he had also had sewn on. On the back of the jacket, was an incredible embroidered piece that took up the entire back of the jacket. The scene was a map of Afghanistan and about the Enduring Freedom Operation where they, alongside British Special Forces, ousted the Taliban regime from power in Kabul and most of Afghanistan in a matter of weeks.

Ten years later, people still ask me why after suffering such a significant personal financial loss, I still continue the project. They wonder how I can even keep it going when orders are just trickling in. I tell them about this memorable event in the project's history, and I tell them it is about a promise to the heroes of 9/11 to NEVER FORGET. For me, as tough as it is at times to continue to breath life into this project, it is about the families of the lost heroes that have to go on with their lives--without their husbands, fathers & sons. While many in our great nation have moved on, I feel it is my duty to continue the work of the project to insure the memory of their ultimate sacrifice lives on.

If you believe in the project and would like to see it stay open, there are a number of ways you can help. The website is http://9-11patchproject.org and you will see where their are opportunities to purchase the patches & decals, add your name to the 9/11 WALL, make a donation or even apply for the Capital One 9/11 cards. Any level of support would be greatly appreciated. Thank you to those out there who have supported this project the past 10 years and allowed me to continue doing what I feel I was called to do!
Posted by 9/11 Patch Project at 8:37 AM