The Sponsorship That Gives Back 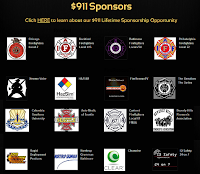 What is a $911 Sponsor and how does it help our non profit organization as well as your company? The short answer is that it is a program initiated by the 9/11 Patch Project to help fund the project. Those who step up to become a $911 Sponsor receive a lifetime of promotion!

In these uncertain economical times, Fire/EMS and other companies are looking for the best bang for their buck. Ad's in major fire magazines can cost thousands and you never really know who sees it or how many sales are generated because of it. And, the Ad can be buried in the magazine--a magazine with a relatively short life span.

CASE STUDY: TheBattalion.TV has been one of $911 Sponsors for nearly 2 years now. You can see them on our sponsor page and even on display at the various trade shows we attend. For instance, during the San Diego Firehouse World show, the 9-11 Patch Project and our partners, Hero Industries and Xtreme Valor, had a 10X20 booth. Our non profit effort to remember the heroes of 9/11 and raise funds for 9/11 charities attracted the interest of the local San Diego KUSI Channel 5 News. We were the only exhibitor at Firehouse World to get the news coverage and this also brought attention to our sponsor, TheBattalion.tv. As you can see in this news clip, they received a few exposures due to their large poster we had on display at our booth.

As an admin to the Facebook NeverForget911 page, we also have the opportunity to post info on our sponsors to over 444,000 fans. We also promote those who step up to become our sponsors through our other 3 Facebook pages, Twitter and this BLOG that has well over 35,000 reads.

The $911 Sponsor is a one time donation and we will promote your company for a life time. Spend thousands on magazine articles, newspaper ads or even television ads; or put some of your advertising budget towards a worthy non profit organization and let us promote you through our social media sites as well as events and trade shows we hold or attend. More information on the $911 Sponsor program HERE.