Shredding a tire while traveling 70mph in the fast lane is never good for ones health--doing the same exact thing 60 miles further really makes one think!

Does lighting strike in the same exact spot twice? Everything I have ever read tells me that it is nearly impossible for that to happen. In my case, a long ride home from a trade show in San Diego to LA, proved to be an experience I will never forget.

I had been at Firehouse World in San Diego where we had exhibited a booth with the 9/11 Patch Project, Xtreme Valor and Hero Industries. It was a great time with great friends yet leaving to return home by 4pm, was something I was ready to do. I had very important career interviews the next day at noon and was really wanting to get home and prepare.

As luck would have it, I was giving one of our partners a ride back to his hotel when he frantically began checking his pockets for his car keys. Soon he discovered that his partner, who had left 45mins earlier, had taken his keys. So he made the call and asked her to drop his keys at a gas station off the 15 fwy and then asked me if I could take him there and then back to his hotel. There was no reluctance on my part, there was no question that I was going to help a brother out.

Traffic had precluded his partner from traveling more than 15-20 miles so it took us about an hour to get his keys and then return to his hotel--we had dinner in between.

By now, it was about 8pm and I decided to head over to the 5 fwy for a fast trip home. About 40 miles out of San Diego I began experiencing a major speed wobble and frantically attempted to keep my Sequoia under control as I made my way to the narrow emergency lane. I safely arrived next to a call box.

As I inspected the rear left tire, it had come apart on the rim and there was not much left--thoughts of a flat spare immediately entered my mind along with my meeting in the morning and a long wait for a tow truck. So I called and told the operator I had Geico road side service and he gave me a 60 min ETA.

While I was waiting, a CHP officer pulled up behind me and said it was best to try and move the vehicle to a safer and wider lane. I drove another mile as the tire continued to shred and tear apart the wheel trim and mud flap. 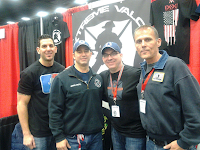 Finally, the tow driver appeared and suggested he replace the shredded tire with the flat spare--he would later put as much air as he could in it. All seemed to go well as I got back on the road and exited at the nearest gas station to completely fill the tire....read on, it gets better! (or worse, actually)

60 miles later, as I was about 30 miles from home, the same exact thing happened--the left rear spare tire completely shredded off the rim and I attempted to make my way to the right shoulder. There was much more traffic at this point and people would not let me get over. Finally, I made it to safety and noticed as I exited the vehicle, that much more damage had been done to the rear wheel well area. I felt lucky to have survived yet another shredding but at the same time, knew this was going to take me into the wee hours of the morning.

Again I called Geico and 30 min's later, a flat bed arrived. By now it was about 1am and all I could think about was my three interviews coming up at noon. By the time he had towed me and my wife arrived, it was about 2am and I finally made it home and in bed at about 3am.

Despite the life changing experience, I arrived for the three interviews at noon with little sleep, but still nailed them all!

Later on I thought about the experience and was thankful that my friend had left his keys in his partners car. Had I just went home from the event at 4pm as planned, I may have made it as far as the location where the 2nd tire blew--changed to the flat spare--gone home to go to bed--and then lost the spare on the way to my interviews. I am confident that I would have missed the three interviews if that scenario had played out.

It was truly a Trial By Tire that I had survived but also a personal experience that proved things do happen for a reason. That tire was going to blow and so was the spare. Having it happen on the open road late at night was much better than when my entire family was in the car--things could have been much worse!