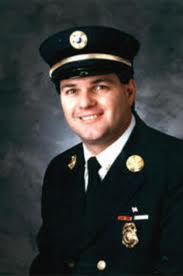 The Terry Farrell Firefighters Fund was established in memory of Terry Farrell, a decorated member of Rescue 4/FDNY and Chief of Dix Hills Volunteer Fire Department. Terry, along with 342 of his brothers, perished on September 11th, 2001 in the World Trade Center attack. Our fund is here to assist Firefighters with educational, medical and equipment needs.

Brian Farrell, brother of Terry and President of the fund, is a gruff out- spoken man with a big heart who has raised 100's of thousands of dollars over the years in his brothers name. Many firefighters and their families have benefited from his persevering hard work since he began this national effort in 2002.

I met Brian on a phone call many years ago, and then finally in person only a couple of years ago. He is a big man with a big presence. Like fellow New Yorker and activist John Feal, Brian is not afraid to say what needs to be said and get the job done. I am proud to have Brian as a friend and happy to use the 9/11 Patch Project as a means to raise much needed funds for the Terry Farrell Fund whenever possible.

The Fully Involved Comedy Tour is the latest fund raising project initiated by the 9/11 Patch Project to attempt to bring a night of the healing power of comedy and fund raising to hundreds  of Southern California residents. The Terry Farrell Fund is one of the great funds that will benefit from this event that stars actor and comedian, Adam Ferrara (Rescue Me, Top Gear U.S., Comedy Central).

As is mentioned on the Terry Farrell Fund website, without the help of citizens out there, his fund will cease to exist and our show will not achieve its fund raising goals. As is the case with the Feal Good Foundation (FGF), the Terry Fund helps firefighters and other 1st Responders in need today.

The 9/11 Patch Project is seeking $911 Lifetime Sponsorships to offset the nearly $12,000 it costs to produce this show which will be at the House of Blues in San Diego on Feb 20th.

Tickets range from $25 (standing room) to $45 (box seats) and can be purchased now from TICKETMASTER.

It is a sad truth that 9/11 happened 12 years ago and many have since moved on--even firefighters. We are indeed a resilient nation but too many of us have forgotten those we need to continue to remember and those who continue to need the nations help. Will you help us and our efforts so we can continue helping those great organizations like the Terry Fund and the Feal Good Foundation continue to do their best work? Remembering and continuing to give will make us a better nation.

Thanks in advance for whatever you are willing to do to support our efforts on Feb 20th down in San Diego. Here is more information on this great night of comedy and fund raising: Fully Involved Comedy Tour