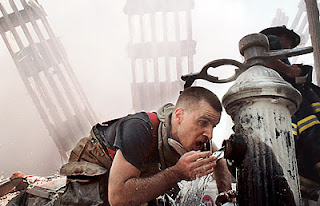 "PLEASE DON'T FORGET US." These four words were spoken to an LAFD Firefighter from an FDNY Firefighter at Ground Zero, September of 2001.

As the LAFD USAR Task Force was getting ready to leave, after their initial 2-week tour at Ground Zero, they were shaking hands and one FDNY firefighter grabbed my friends hand--held it firmly--looked him straight in the eye--and deliberately spoke those four words. I heard this from my LAFD friend who had just returned from Ground Zero. He told me this because I asked him what touched him the most after spending two weeks there working alongside the FDNY, trying to recover fellow firefighters who were lost in the rubble of the World Trade Centers.

These four words led me to start the 9/11 Patch Project nearly 10 year ago. The project would produce a 9/11 Tribute Patch for all firefighter uniforms--a way to honor fallen brothers--a reminder of what we all signed up for--and a way to raise funds for the families of the fallen. I was a firefighter/paramedic of 15 years at the time, working in Southern California.

In the first year of the 9/11 Patch Project, mailers were sent to all fire departments across our nation. Some took the mail as junk and tossed it--some thought it the work of an opportunist wanting to capitalize on the death of firefighters to make money, and tossed it--and some ordered patches and continue to wear them on their uniforms to this day. The first run of patch orders brought over $15,000 that was donated to the FDNY Uniform Firefighters Association on September 11, 2002.

Today, I still send mailers but reluctantly. More of them are thrown away as Chiefs and Union Presidents remain skeptical or just feel it's time to move on. I send emails but most are taken as spam and are deleted or just ignored. The 9/11 Patch Project newsletter is even shrinking--and most are on the list because they made a purchase or signed on at some point and time.

What recently inspired me to write this blog was a response I received from the Idaho Fire Chiefs Association after asking for their help to spread the word about the 9/11 Patch Project's 10 Year 9/11 Anniversary Plans to their State's Firefighters. One of the Board Members of the IFCA brought it up at one of their meetings and he told me there was just not enough interest in the project. WOW...have we really forgotten? Or is that just the feeling of the Fire Chief's in Idaho? (one of the first major 10 Year 9/11 Anniversary Tour stops was  in Jerome, Idaho.) I don't fault the messenger as I truly believe he thought highly of the project. Still on the other hand, the Nevada Fire Chiefs Association posted the info right on their home page. You can see it still there listed as the 2nd bullet point. Hit and miss but mostly miss! It's a lot of work but I never quit!

Even after 10 Years have gone by--many in America seemed to have moved on. Or at least the fire departments across the nation. Even with an endorsement from the FDNY Uniformed Fire Officers Association--fire departments remain skeptical or have just moved on. It's sad but I have witnessed the decline in support over the years, first hand.

You see when this project began nearly 10 years ago it was about remembering--not just for a year or two--remembering was supposed to mean forever.

As for me and the history of the 9/11 Patch Project, I will continue to remember and try and help the world continue to remember the heroes of 9/11. I'm not obsessed--I just feel a duty to continue responding to the words of one FDNY Firefighter nearly 10 years ago, who asked us on behalf of his brother FDNY Firefighters to never forget. Will you continue to remember? If you are a Fire Chief, will you lead--inspire--make your firefighters feel strong--try and bridge the enormous gap between chiefs and rank and file? Or will you tell them like a parent tells a child, it's time to forget about it and move on?

If you want to remember and continue to support the project, know that when you purchase the items on the project website that you are also contributing to the 9 year fund raising effort.
Posted by 9/11 Patch Project at 5:45 PM