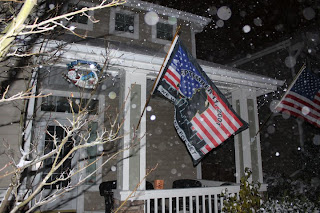 The flag measures 3' X 5' and is a standard size flag. There are two sides of the flag sewn together to make it durable and able to withstand extreme weather conditions. Both sides are mirrored images so that when put together, has the stars and strips both right and left positioned--like a normal American Flag.

The material is a strong nylon/polyester and due to the double material--it will not tear during extreme wind conditions. The flag was made this way to ride on top of or behind fire apparatus and stay in tact. 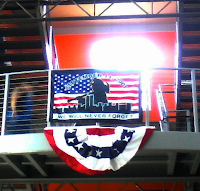 The 9/11 flag can be used as a banner, fly from a pole or be hung at an event.  As seen in the picture to the right, the 9/11 Flag is hanging at the Harley Center in San Diego.

However people decide to display the 9/11 Flag, it is the 9/11 Patch Project's hope that all American's across our land with show their support this 10 Year Anniversary of 9/11, by getting one or two.

As is the case with the 9/11 Patches and Decals, these flags are also used to raise funds for the FDNY Bravest Scholarship Fund, The Terry Farrell Fund and the Feal Good Foundation. 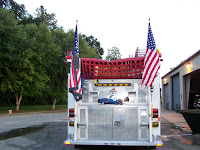 The Loxley Fire Department chose the 9/11 Flag to fly next to the American Flag on the rear of their apparatus.

Other fire departments have elected to also fly the flag from the top of their apparatus or even hang it on the rear of the apparatus as a banner.