I remember the conversation like it was yesterday. An LAFD USAR Task Force member and good friend of mine, had just returned from a tour at Ground Zero. I asked him what moved him the most while he was there for 2 weeks; arriving within days of the horrible event. He told me this, "As our Task Force was packing up and getting ready to come home to L.A., we were all shaking hands with the FDNY Firefighters we had worked alongside. One grabbed my hand...squeezed it firmly...looked me straight in the eyes...and said, PLEASE DON'T FORGET US."

This moved me to find some way to assure the FDNY that we would never forget. It came in the form of a uniform patch...one that included symbols of the day we lost 343 brave brothers...and one that sent them a clear message that we would NEVER FORGET them.

The design of the patch was created and displayed on a banner that was presented to 6 FDNY bike riders that rode across America to thank Americans for their outpouring of love and support. The "Thank You America Tour," started In the Bowery (Manhattan) and ended in Pasadena, California...less than a mile away from where I had been stationed as a Firefighter for the previous 15 years. It was an opportunity to get the acceptance and support from FDNY members prior to producing the patch.

The 9-11 Patch Project was created in December of 2001 with the goals to get as many of the 9-11 Patches on uniforms as possible while raising funds. It was to begin the healing process and make that promise to Never Forget them. Proceeds from the sale of the $3 patches would go on to benefit the UFA and other 9/11 related charities.

Fire Departments around the world came forward...even all branches of the U.S. Military stepped up as if to say, we are your brothers too and we will fight in your honor. The project evolved to create decals, challenge coins and other memorial items to keep the memory alive and raise funds. 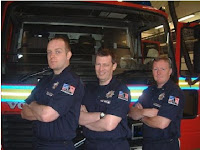 Today, the project has served over 10,000 organizations in 30 plus countries. Even firefighters from other countries chose to wear the 9-11 Patches on their uniforms. (pictured left: Greater Manchester FD in the UK)

Keeping this project on everyone's radar all year round has been a tough nut to crack. Beating the same drum loudly and nearly every day the past 13 years, has most likely been seen as bordering on obsession by many others. So what does one do? I believe this is the answer; 9-11 and the loss of life to the 1st Responder community on that day is part of our history and our future. We remember our fallen brothers and we assure them that we will Never Forget. Some will appreciate this while others will simply move on. Beyond that, we also remind those who choose this profession, of what those who came before them were willing to do and actually did for people they never even met.

Those 1st Responder agencies that wear one of the 9-11 Patches are truly wearing their hearts on their sleeves and sharing common threads. We're not completely healed from the tragedy of that day but we are slowly getting "patched up," and I think that means a lot to our FDNY brothers, some of who are beginning to wear the patches as well.

Be a sponsor to an FDNY Firehouse and send them the 9-11 Patches for free here: http://www.9-11patchproject.org/fdny-sponsor.html