December 15th, 2013, marked the 12th anniversary of the 9-11 Patch Project. As the photo shows, the design for a uniform patch that 1st Responders could wear to honor the fallen, was unveiled to the FDNY Thank You America Tour, as it ended in Pasadena, California.

6 FDNY bike riders from the Bowery's 33-Engine, who lost 12 of their own, made this 2800 mile trip across America to thank American's for their outpouring of love and support. Their tour ended in Pasadena (west coast) about 1 mile from the 9-11 Patch Project founders station.

Aligning the project with the FDNY and getting their blessing was founder Brett Hill's 1st priority. Two months from the date of this ceremony and when the photo was taken, December 15th, the project began taking orders from fire departments and other organizations around the nation. Orders for the patch would come in to the Valencia project headquarters at 25-50 per day for about 6 months. By the 1st anniversary date of September 11 or 9-11-02, $15,000 arrived in the FDNY Uniformed Firefighters office. This was the net proceeds of selling the $3 patches.

Over the past 12 years, the project grew to include all 1st Responders and our U.S. Military. To date, there are over 10,000 organizations in 30 countries participating. The project also added other patches, decals, a challenge coin, memorial shield and other memorial items.

Beyond the fund raising from the merchandise, other events were held to benefit charities like The Bravest

Scholarship Fund, Terry Farrell Fund and the Feal Good Foundation. The 10 yr 9-11 Manhattan to Manhattan Tour, with FireCareers as the major sponsor, was a large 9-11 Bus that traveled from Manhattan Beach in California to Manhattan NY in 9 months. The tour brought about awareness of the 10 year mark and raised funds at the 275 stops in 30 U.S. States.

The Fully Involved Comedy Tour, featuring comedian Ralphie May, was held in Baltimore during the Firehouse Expo in July of 2012.

Today, with 9-11 a little over 12 years behind us, the 9-11 Patch Project continues to perpetuate the memory of the fallen heroes of 9-11 and raise funds whenever possible. It's tough to keep this project in the minds of folks twelve years later, but the 9-11 Patch Project continues to do it's best. Without the support of so many out there, we would not be around today. 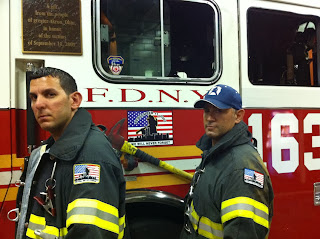 In closing, our latest event is a fund raiser to give the 9-11 Patches to all 11,000 members of the FDNY. This will cost about $15,000 and we are on our way with $983 raised by 23 donors in the past 20 days. With thousands around the world wearing the patch, it makes sense to include the very firefighters who's tragic loss on that day became the inspiration for this project. We don't want any of them to have to pay for these patches. Those who step up are rewarded with patches and challenge coins and their names will go in each patch donation letter that is sent to the FDNY. If you'd like to be part of this great event, please follow this link: http://www.gofundme.com/5gneuk

Thanks to all of you who have supported this project so many years! We appreciate you all as I'm sure the families of the fallen heroes do. More about the project HERE