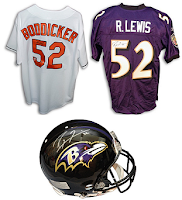 Firehouse Expo & 9/11 Patch Project's Fully Involved Comedy Tour will be a huge night in Baltimore! Starting at 6pm, on July 19th, we will start off the night with a huge Silent Auction, hosted by BW Unlimited--featuring signed Sports Memorabilia, unsigned items, jewelry, gift baskets, travel packages and  much more. 100% of the proceeds of the auction and the show, will benefit the Feal Good Foundation, Terry Farrell Fund, NYC Bravest Scholarship Fund and the 9/11 Patch Project Fund.

Around 7:30, amazing escape artist Spencer Horsman, seen recently on America's Got Talent, will open the show with a death defying escape! As the youngest escape artist in the world, at 26, Spencer has already thrilled millions of TV viewers by escaping the giant jaws of a bear trap while hanging 20 feet above the stage in a straight jacket and also escaped drowning by freeing himself from a locked water tank while holding his breath. What will he do on stage in Baltimore? You don't want to miss this!! 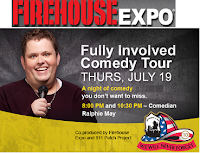 Finally, our headline act was a former contestant on Last Comic Standing, and has already had four specials on Comedy Central. Ralphie’s record breaking fourth Comedy Central special, “Too Big to Ignore” aired March 4.Voted one of Variety’s 10 Comics to Watch, Ralphie May spreads his comedic wealth further than ever by tackling topics that will make you think and occasionally squirm. With no subject off limits, Ralphie dives in and reveals the hilarious quirks that infiltrate politics, race and even his family. Lovable enough to get away with anything, Ralphie continues to capture the hearts of thousands on his sold out tours and promises to make you gleefully uncomfortable.

The Fully Involved Comedy Tour is an official event of the Baltimore Firehouse Expo and is also open to the public. With only 4 days left, grab your tickets while you can HERE. Special thanks to our Gold Event Sponsor is the Feal Good Foundation.