Is it Time to Move on?

At the end of 2011 I take a moment to reflect over the past year and the previous 10 that I have submerged my life into the 9/11 Patch Project. There are no mixed emotions...the drive to get one of the four 9/11 Patches on all public safety and and U.S. military uniforms or other clothing, is a journey I began in December of 2001 and a journey that will only end when I do. Is it an obsession over 9/11? No, it is about keeping a promise to Never Forget.

It is time to move on from the tragic, graphic and horrible images of 9/11 but it is not time to forget. When I heard the words, "Please Don't Forget Us," spoken from an FDNY Firefighter to an LAFD Firefighter at Ground Zero, it did not mean to me that I would run the 9/11 Patch Project for 10 years and move on. To Never Forget, means to always remember...simple translation and an obvious one at that. But, it does not seem so obvious to many in this resilient nation who have literally decided to completely move on.

Every new fire recruit at the Rio Hondo Fire Academy in Santa Fe Springs, California, receives two patches to be sewn on their academy uniforms--the Rio Hondo Patch and the 9/11 Patch. Even 10 years after the tragic event that took the lives of 343 firefighters, those that have decided to start their career at Rio Hondo, will do so fully understanding the sacrifice of so many that came before them. They will also understand fully, what they may face as a future firefighter. This is a message that Academy Chief Tracy Rickman sends to every fire recruit that comes through Rio Hondo Fire Academy. As one of the guest speakers at Rio Hondo's 2011 summer graduation, it was truly inspirational to look out at the graduating class and see them all proudly wearing their 9/11 Patches.

As many across the nation completely move on from 9/11, the 9/11 Patch Project ramps up by recently hiring 24 representatives to continue the 9/11 Patch drive on a closer and more personal level. Working from Southern California the past 10 years has been challenging. Sending out newsletters, posting on Facebook (and many other social networks), sending emails, posting press releases and making phone calls has just not been enough. The project has even sent out two mailers to every fire department in the nation the past 10 years and it has just not been enough. Having local representatives utilizing their professional connections and actually visiting organizations, is something that has become very necessary. 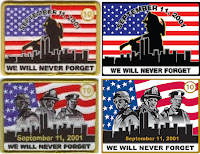 Although the 9/11 Patch Project appreciates the purchase of one or two patches & decals from supporters on Facebook's NeverForget911 page, the project is really about getting these patches on the shoulders of all public safety and U.S. military uniforms. It is about taking one of the most tragic events in American History and turning it into a positive moving forward. The world responded in a way we have never seen after the events of 9/11. People came together--borders were erased--politics were ignored--and cultural differences didn't matter. This simple idea of a 9/11 Patch on every uniform helps us all remember the heroes of 9/11 and remember how the world came together after the lives lost on 9/11 became the world's loss.

So pick up a patch or decal if you are wondering why you see them on the shoulders of firefighters, police officers and soldiers around the world. If you are an organization that honors and continues to remember the loss of your fellow heroes of 9/11, then pick up a 100 or so and get them on your uniforms. It's been 10 years but it's never too late to Never Forget.