A Belgian Firefighter and a 9/11 Patch 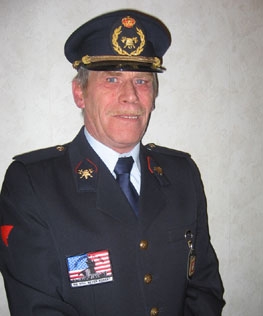 I had just finished filling another 35 orders--it was about 9pm and I had a 48 hour shift to work in the morning. Just before leaving the office, I logged on and checked my email--up popped this picture of a Belgian Firefighter (Bob) wearing the 9/11 Patch on the front of his Class A uniform. I was awed by the image of a non-U.S. firefighter wearing the 9/11 Patch with the backdrop of our U.S. Flag, right on the front of his uniform! And, this project had crossed the borders of the U.S. and made it thousands of miles across the Atlantic. More important to me was the fact our loss of 343 brother firefighters became Bob's loss too.

This was back in March of 2002 when I was filling over 25 orders everyday for nearly 5 months. I would work my 48 shift at the Fire Department and spend my four days off filling orders--sometimes until 11pm. I looked forward to my email everyday because pictures like this were sent to me all the time.

Bob was the first picture sent to me of a non-U.S. firefighter wearing the 9/11 Patch. It is the most important picture as it was the first to demonstrate the world's response to the attacks on America, September 11, 2001. Bob was the only firefighter from Belgium to actually send his photo to me but many more Belgians would order the 9/11 Patches and Decals over the years.

You see, it's not just about a patch anymore--it is about a fraternity of public safety and military personnel around the world that share common threads and all wear their hearts on their sleeves. Out of the tragedy of 9/11 came a unique act of solidarity that would go on to be unparallelled over the past 10 years. Are you wearing your 9/11 Patch or displaying your 9/11 decal?
Posted by 9/11 Patch Project at 6:50 PM