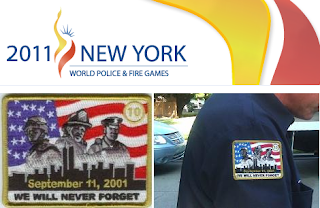 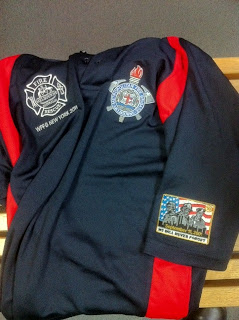 The other 10 Yr 9/11 Patch features a single firefighter holding an axe--rising over the Twin Towers. This patch will be worn by the FDNY Fire & Ice Hockey Team during the games with the "3-Heroes" version worn by all 56 members of the Melbourne Australia Team.

It is important to note that the Melbourne Australia team donated $550 dollars to the 9/11 Patch Project Fund to have the 10 Yr 3-Heroes 9/11 design directly embroidered on each of the 56 members' team jerseys.