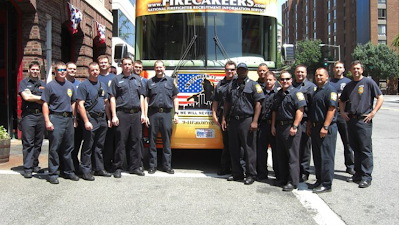 Washington D.C. Firefighters met with the 9/11 Bus Tour on July 31st and kicked off one of the busiest weeks for the 10 Yr 9/11 Manhattan to Manhattan Tour since leaving Manhattan Beach (CA) on January 25th of this year.

All hosting agencies greeted the 9/11 Bus with enthusiasm and plenty of visitors. Sales of the fund raising 9/11 Patches and Decals were among the best recorded at Northrop Grumman's Electronics plant near Baltimore. Out of the visits for the week, Northrop Grumman, both Baltimore Fire unions and Ann Arundel County Firefighters, became sponsors by getting their logo's on the bus. 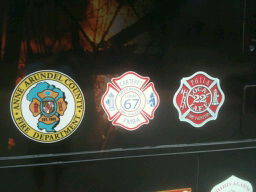 Ann Arundel County even had a surprise ceremony for the bus when it rolled in, including their county seal waiting to be placed on the bus. In the picture to the right, the Ann Arundel County Firefighters seal can be seen on the bus next to New Jersey's Carteret Firefighters and Philadelphia Firefighters IAFF Local 22. All the organizations that got on the bus, did so after a donation each, of $911.11 (the amount commensurate with the 10 Yr Anniversary of 9/11).

In addition to the fellowship, sharing stories, fund raising, and group photo's with the bus, the organizations getting their names and logo's on the bus, will ride with the bus the rest of the tour and roll into Manhattan around September 7th, to participate in 10 Yr 9/11 Anniversary ceremonies. It is a great opportunity for those that hosted tour stops and those who just wanted to be counted among the supporters of this historical journey, as the tour spends time in Manhattan with the FDNY and other New Yorkers.