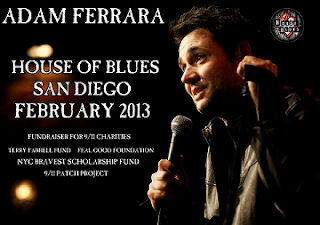 As Top Gear host, Rescue Me star and comedian with several Comedy Central specials, Adam Ferrara is a busy man. But not too busy to host a 9/11 charitable event on behalf of the 9/11 Patch Project.

Adam is set to take the stage at the House of Blues in San Diego on behalf of the Feal Good Foundation, NYC Bravest Scholarship Fund, Terry Farrell Fund and the 9/11 Patch Project Fund. The event will be held on February 20th with two comedy shows for an expected audience of 500 per show. The event is called the "Fully Involved Comedy Tour," and is the 2nd stop following comedian Ralphie May's hit shows in Baltimore, back in July.

Adam is no stranger to the 9/11 Patch Project. His friendship with our Director of Events & Marketing helped him become interested and involved with our fund raising efforts.

When Adam is not filming episodes of Top Gear he is hitting comedy clubs across the country. One of his best shows is a Comedy Central hit called "Funny as Hell," and he is! Adam has also appeared on the Jay Leno Tonight Show several times.

The shows in San Diego are being held in conjunction with the Firehouse World show and are open to the general public. All the net proceeds from ticket sales will be equally split between the four 9/11 charities.

To pull off a show of this magnitude and insure there are significant funds raised, sponsorships are vital. Please consider becoming one of our sponsors for this great event and we'll make sure your organization gets the promotion it deserves; you help us--we'll help you!

For those that want to attend the event, tickets are now on sale at TicketMaster and the House of Blues.
Posted by 9/11 Patch Project at 9:19 PM