As good looking as these guys are, they are not models. They are firefighters-one wearing the 9/11 3-Heroes Patch on his turnout coat and the other wearing the 10 yr Original 9/11 Patch on his job-shirt.

One is Canadian and the other French. Both wear the patches, with the back drop of our American Flag, to honor the memory of the FDNY, NYPD and PAPD heroes that gave it all on 9/11/01. They wear the patches alongside fellow firefighters in the U.S. and 20 other countries.

For nearly 10 years now, the 9/11 Patch Project has been promoting these patches as permanent 9/11 Tribute Patches for the uniforms of Firefighters, EMT's, Police Officers and U.S. Soldiers. Proceeds from the sale of these patches are raised for three organizations; The FDNY Bravest Scholarship Fund (providing $10,000 scholarships for the children of FDNY Firefighters), the Terry Farrell Fund (helping firefighters across America with equipment needs) and the Feal Good Foundation (Helping Fire, EMS, Police, Construction Workers and other personnel who became ill or injured after working at Ground Zero) 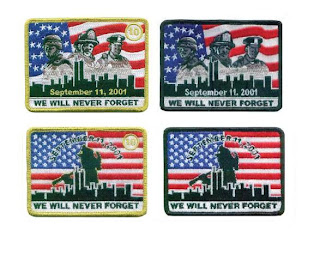 The project is open to the public and patches and decals are available for everyone. Rather than just ask for donations to support a cause, we raise funds from the sale of the patches--giving you all something very tangible for your donation. Something that helps the world remember the heroes of 9/11 and something that allows you to wear your heart on your sleeve.

So with the 10 Year Anniversary of 9/11 less than 4 months away, now is a great time for you and your organizations to pick some up- sew them on your clothing-and wear them proudly!