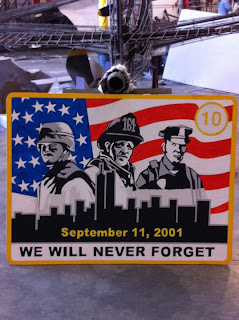 The 9/11 Rose Float is entered into this coming Pasadena Tournament of Roses by L.A. County Firefighter Jerry Thomsen and is sponsored by the L.A. County Fireman's Health & Benefits Association.

The float will feature both of the 9/11 Patch Project's 10 Year 9/11 Anniversary Patches and is the first 9/11 Themed Float to ever be entered into the Rose Parade.

This 9/11 Tribute Float will mark the 1st day of the 10 Year Anniversary of 9/11 and pay tribute to all who were lost on that day. Family members of those who perished will also be riding on the float.

As this float ushers in the 10 Year Anniversary of 9/11 it is also the 9/11 Patch Projects goal to get these 10 Year tribute patches on all Fire, EMT, Police and Military uniforms throughout 2011.

Funds raised from the sale of patches will benefit the FDNY Bravest Scholarship Fund and the Terry Farrell Firefighters Fund.
Posted by 9/11 Patch Project at 12:35 PM